The stars whose mass is not too high have White Dwarf as their final evolutionary state, such stars comprise almost 97% of the galaxy. Stars generate energy by hydrogen fusion process. Once such mass is exhausted, this star expands into a red giant, where helium is processed into carbon and oxygen. Technically this process is known as the triple-alpha process.

A red giant must have sufficient mass to generate the core temperatures required to fuse carbon; an absence of same will lead to build up of inert mass of carbon and oxygen at its center. Such stars then expel their outer material, creating what is known as planetary nebula. Only the hot core of the star remains. This core then becomes a young white dwarf, which cools down over the course of the next billion years or so usually, therefore, white dwarfs are composed of carbon and oxygen.

In general electrons with the same spin are not allowed to occupy the same energy level by Pauli Exclusion Principle. Moreover in normal gas there are not enough electrons floating around to completely fill up all the energy levels. But in a white dwarf, all of the electrons are forced close together; soon all the energy levels in its atoms are filled up with electrons. If all the energy levels are filled, and it is impossible to put more than two electrons in each level, then our white dwarf has become degenerate. For gravity to compress the white dwarf anymore, it must force electrons where they cannot go. Once a star is degenerate, gravity cannot compress it any more because quantum mechanics tells us there is no more available space to be taken up. Thus further collapse is prevented due to quantum mechanical principles. The white dwarf can have only certain amount of mass. Subrahmanyan Chandrasekhar discovered this limit to be 1.4 times the mass of our Sun. (This is appropriately known as the “Chandrasekhar limit”.)

Due to extremely high surface gravity the atmosphere is close around it and is of a very thin layer. The heavier atoms in its atmosphere sink and the lighter ones remain at the surface. Some white dwarfs have almost pure hydrogen or helium atmospheres. The White Dwarfs remain a very challenging field for scientists. 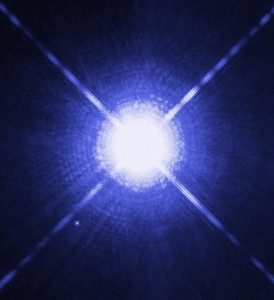