All about Neutron stars and Pulsars

Neutron stars are a type of remnant that can result from the gravitational collapse of a massive star during a Type II, Type 1b or Type 1c supernova event. They are almost entirely comprised of neutrons and hence the name. Neutrons are those sub-atomic particles that have no electrical charge and have a mass equal to that of the protons. 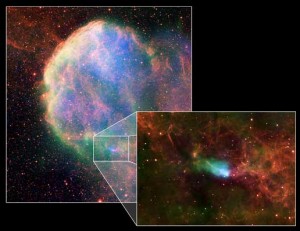 The core of a gigantic star is fully compressed during a supernova. It then collapses into a neutron star and it maintains most of its angular momentum. When a neutron star is formed, it has a very high rotation speed, and then it slows down steadily. This rotation period of neutron stars ranges from 1.4ms to 30 seconds. Since the neutron star is very compact, it makes way for a very high surface gravity to a value of up to 7*10¹²m/s².

A neutron star is so solid that one teaspoon of its material would have a mass of over 5*10¹² kg. The resulting force of gravity is so strong that, if an object were to fall from just one meter high it would only take one microsecond to hit the surface of the neutron star, and would do so at around 2000 kilometers per second. The temperature inside a newly formed neutron star is unimaginably high. It ranges from 10¹¹ to 10¹² Kelvin.

As mentioned above, the neutron stars rotate at a very high speed when they are newly formed. This high rotation speed is due to the conservation of angular momentum. Over time, the neutron star slows down it speed. The reason for this is because their rotating magnetic fields radiate energy and so older neutrons may take up to several seconds for each revolution.

Pulsars are also a type of neutron star. They are highly magnetized, rotating neutron stars that emit a beam of electromagnetic radiation. The time period of their pulses may range from 1.4 milliseconds to 8.5 seconds. The electromagnetic radiation can only be observed when the beam of emission is pointing towards the earth. This effect is known as the lighthouse effect. However, the premise of how the pulsars emit their radiation still remains as a mystery. 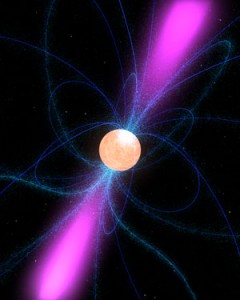 The first pulsar was observed in July 1967 and at first, the scientists who discovered it were quite taken by surprise since it seemed out of space to them. The word “pulsar” was then coined from two words – “pulsating star” in 1968.